When Michele Ouellet (pronounced oo-lett) welcomed us into her Williamsburg apartment on a Saturday morning, she was wearing a pair of worn-to-bits – literally – denim shorts. So worn, in fact, that when she turned her back to us we got a peep of… Well, you’ll see. They were Paper, Denim & Cloth from back in the day. At least ten years old, but probably older. These days, the cut-offs’ back pockets are hanging by threads, the front pocket linings are more than exposed, and the shorts are beyond faded. But they look amazing, especially with the Elder Statesman sweater Michele, a model and vintner (she and her mom, Melinda Kearney, make rosé under the Lorenza label), added. We’d never met Michele before today, had only seen her in Madewell’s denim campaigns and Claiborne Swanson Frank’s book American Beauty, and had admired her from afar on Instagram (@kissser). But we were charmed. We hung out in her fairy light-lit, Confetti System-bedecked place for a couple of hours – laughed a lot, got schooled in the basics of wine-making (this girl knows her stuff), and, oh, yeah, took some great photos and heard some good stories.

Yours is some of the most-loved-and-lived-in denim we’ve seen. Where did those shorts come from?

One of my best friends, Emilyn – we’re still best friends. She bought these jeans at the height of designer jean mayhem. And they were-super cool and lived a nice life as their full-length selves. [Jane: those jeans must have been from about 2000, 2001]. So they were her beloved. As time went on, they were ripped at a party…by our friend’s brother. It happened on the corner of a ping-pong table. He ripped a hole in them at about mid-thigh, so Emilyn made them into shorts. And then, eventually, she decided it was time to pass them on to me. I think I got them from her when I was maybe a junior in high school. The were light back then, but they’re almost white now. And they were longer back then, too. I’ve had them for seven or eight years. So they have gotten shorter, and shorter, and shorter since I’ve had them [laughs],  but just because they’ve been well worn. I’ve never cut them. They’ve just been…developing [laughs]. I realized the other day that I have never bought a pair of jean shorts. I only have one other pair that are Ksubi, and a friend gave those to me, too. That is so weird. [laughs]. These have just been the ones.

You travel a lot for work, especially to warm-weather places. Do these come with you everywhere?

Yeah. On my last big trip to Australia was when this big rip in the butt happened. I was putting them on the day after I’d worn them all day. It had been a long day; then  we went to a party on a boat that night. And then the next day I put them on and was like, Were these ripped the whole time yesterday when I was like running around town? [laughs] I don’t know if they were or not. But I was so bummed. I called Emilyn and I was like, Look at what happened! And I sent her a picture. She said, Still wear ‘em – never let those die! Everyone says I should keep going with them, so I will.

Have you ever thought about having them repaired?

I think I’m going to have to get this little one done [points to hole over her derriere]. Do you know who could do that?

Yeah, we can give you the names of some people. The first one that comes to mind is Denim Therapy…there’s also Denim Surgeon, both are in New York.

Okay, cool. These are precious. They have to be handled with care. I have to tell my boyfriend, Don’t touch me in these! They will fall apart! They’re special.

Do you mostly take them on trips? Or do you wear them around your neighborhood in the summer?

I really wear them all the time – around the house when I’m just chilling, I put them on. And they’ve been in every suitcase I’ve taken with me, as far as I can remember.

How often do you travel?

A lot. I was gone all of February. I was shooting in Colombia, then in Costa Rica for Free People… And in L.A. I was working for this t-shirt brand, a cool new skate brand. The name of it hasn’t been released yet. It’s top secret. Then I did a shoot for Violet Grey.

We know you’re from Napa County, California, and that your family has a winery there. But what kind of wine do you make?

My mom and I started a wine brand together. We just released our sixth vintage. We only make rosé – dry, Provençal style. We like to drink it year round. It’s not just for summer. We like to keep that summertime attitude all the time by drinking rosé [laughs].

Do you grow your own grapes?

We buy them from a few different farmers. Then we monitor the grapes during vineyard season to make sure everything’s going according to plan. When we see fit, we decide to harvest, which is very early for the most part – late August, early September. For the rosé we make, we want it to be high in acidity and very crisp. And light in color. All those things happen if you pick early. If you pick late, you have higher sugar content, darker color in the skins. It’s a riper grape.

Wait, so does everyone growing up in Napa just know all this stuff?

Kinda, yeah [laughs]. But it’s something I love learning about. And it’s something I’ll be learning about till the day I die. It’s a vast ocean of knowledge. It’s so much fun to taste wine with experts, people’s parents at home. A lot of my friends at home are getting into making wine on their own, or with their families. It’s nice now that everybody’s coming into their own.

So, you’re out there in the fields?

We’re there, watching everything. It’s just my mom and me, so we literally hand-sell every bottle. We do about 800 cases. In the grand scheme of things, it’s tiny. But for us it’s a lot [laughs].

Are you wearing these shorts during harvest?

Well, we start really early in the morning when it’s freezing. But then the sun comes out and it gets really hot. I have definitely had these shorts around on those days [laughs].

[Laughs loudly] They have no idea what to think of us. They’re so confused by my mom and me. They’re like, Who are these girls? Why are they picking so early? People weren’t used to our methods at the beginning. We make the wine in Lodi, a couple of hours from Napa. They weren’t making this kind of rosé before us. And they told us, You’re picking to early! That’s not right! We were like, Trust us. Now everyone’s like, Oh, check out their rosé.

Do you remember your very first pair of jeans?

I was really skinny when I was younger, so I had to wear kids jeans forever. It sucked. You know who made small sizes was United Colors of Benetton. I definitely wore some Gap jeans. I had no butt, so it would cave in, and that was embarrassing.

What was your first pair of designer jeans?

It’s hard to remember. I had all of them….it might have been Paper, Denim [& Cloth].

Where did you buy them?

There was one cool store called Twenty Six in St. Helena, where I’m from, that was started by a friend of ours and she had all the coolest jeans – 7 [For All Mankind], Citizens [of Humanity], Paper [Denim & Cloth]… everything. It’s closed now. But we thought it was coolest place in the world. Or, we would also go to San Francisco to shop for jeans, too.

How many pairs do you have now?

Ten? 15? I’ll get with one and wear it all the time. I wear Mother. I’ve worked with them a couple of times. I’m a little bit obsessed with Lela. We’ve done some really cool things together. I wear the Looker in Dashing and Dangerous. It’s the current one I wear every day. I only really wear black jeans. Every day, for castings or just running around. And I also have a pair of Rag & Bone ones. They’re really basic, too.

Do you have your eye on anything new for spring?

How did you become a model?

I was scouted in San Francisco when I was 15. And then some people came up north from Ford, which was my first agency, and I met with them and started working. I finished school and everything, though. I was really into volleyball. I played for my school and I did Club, so it was year-round madness. I declined a few very choice bookings for volleyball [laughs], actually. I totally didn’t know any better, and I didn’t care [laughs].

Prada. Miu Miu. I was like, I can’t do those jobs, it’s the playoffs… [laughs loudly]. It’s cool. I’m happy with how everything turned out. 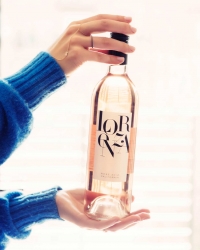