Before moving into her Laurel Canyon home five months ago, photographer Tasya Van Ree did what a lot of us might – she purged. Peripheral, unnecessary clothes be gone! What she kept? These JC Penney Big Mac overalls, for one. Tasya, who hails from Hawaii and came to California in the 90s to attend Santa Clara University on a volleyball scholarship, bought them in Japan more than a decade ago. They were not new. They were not cheap. But they were totally worth it.

What I learned about Tasya while shooting her in her overalls – that she’s been to Arcosanti and loved it there; that she spent the last year “de-programming” herself through meditation; that her physical appearance deceives her upper body strength (thank you, surfing); and that she’s doing a collaboration with Stetson in the fall to celebrate the company’s 150-year anniversary – was just the beginning of this story. The rest is, like Tasya, here, now…

How long have you had your overalls and where did you get them?

I’ve had them for about 13 years. I was on tour with a musician, traveling around the world documenting her life behind the scenes…and between Barcelona and Japan my luggage got lost and was never recovered. All of my favorite pieces of clothing – gone. I had to buy a whole new wardrobe. Starting with these overalls from a little vintage denim shop hidden amongst the crowd…

What comes to mind when you think about that trip?

Loss in inevitable. But there is always beauty in it.

Use one word to describe your overalls.

What do you love most about them?

That whenever I wear them something transformational happens. They reveal something new to  me every time, whether in my daily life or through my art.

So what transformation thing happened the day you wore them for our shoot?

There was an energetic exchange between three creatively strong women that day – you, me, Katrina. And even in the most minute or minuscule of ways, it will change the trajectory of all three of our lives forever. 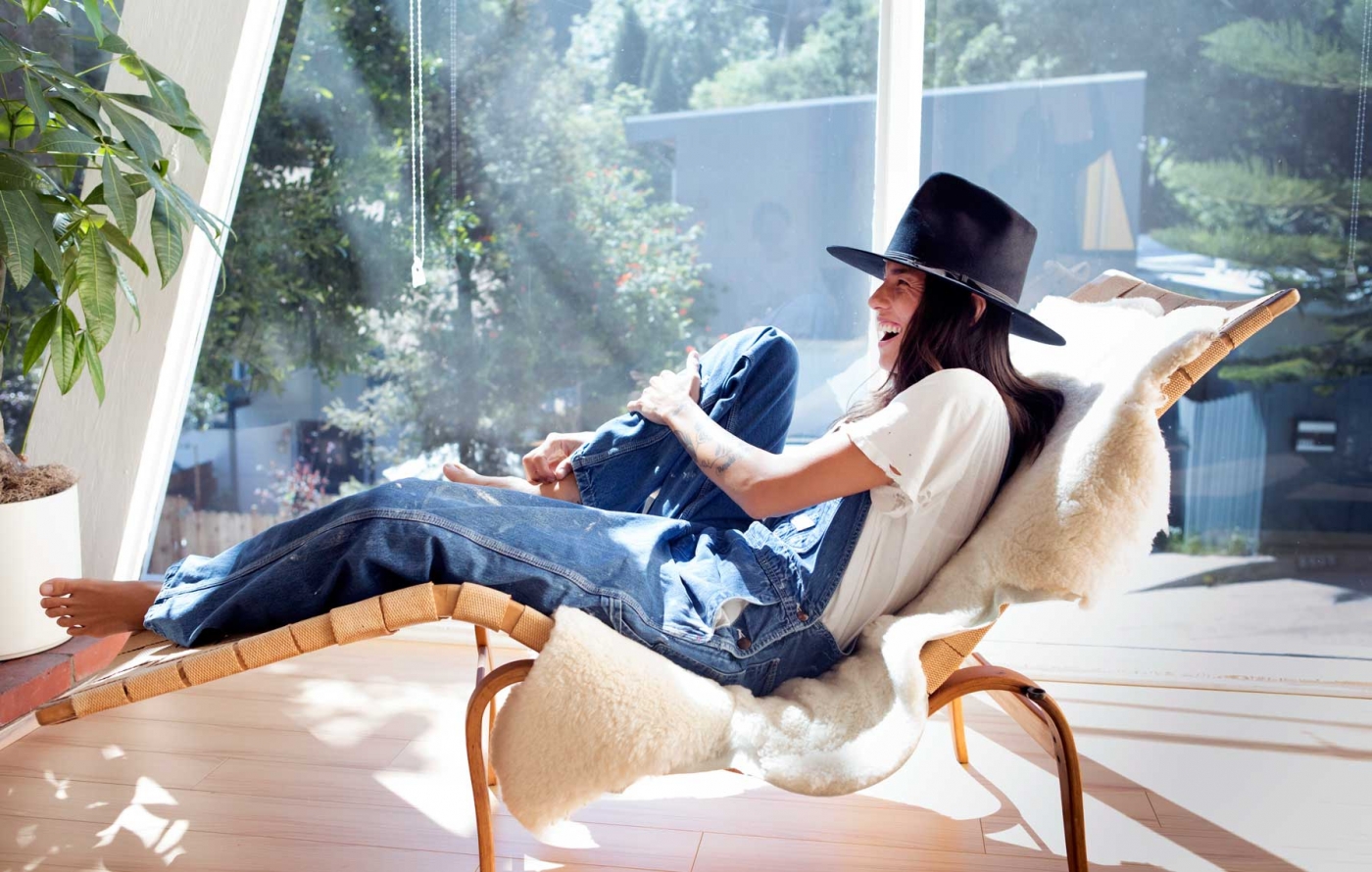 LAID BACK The artist at home in L.A.’s Laurel Canyon.

If your Big Macs could give us a word of advice – maybe it’s something you’ve learned while wearing them – what would they say?

Believe you are infinite.

What do your overalls know about you that we don’t?

What the vibration of my inner dialogue really sounds like.

What’s the most memorable place your overalls have been?

In a room of white, seeing life be born.

Laying next to the love of my life. 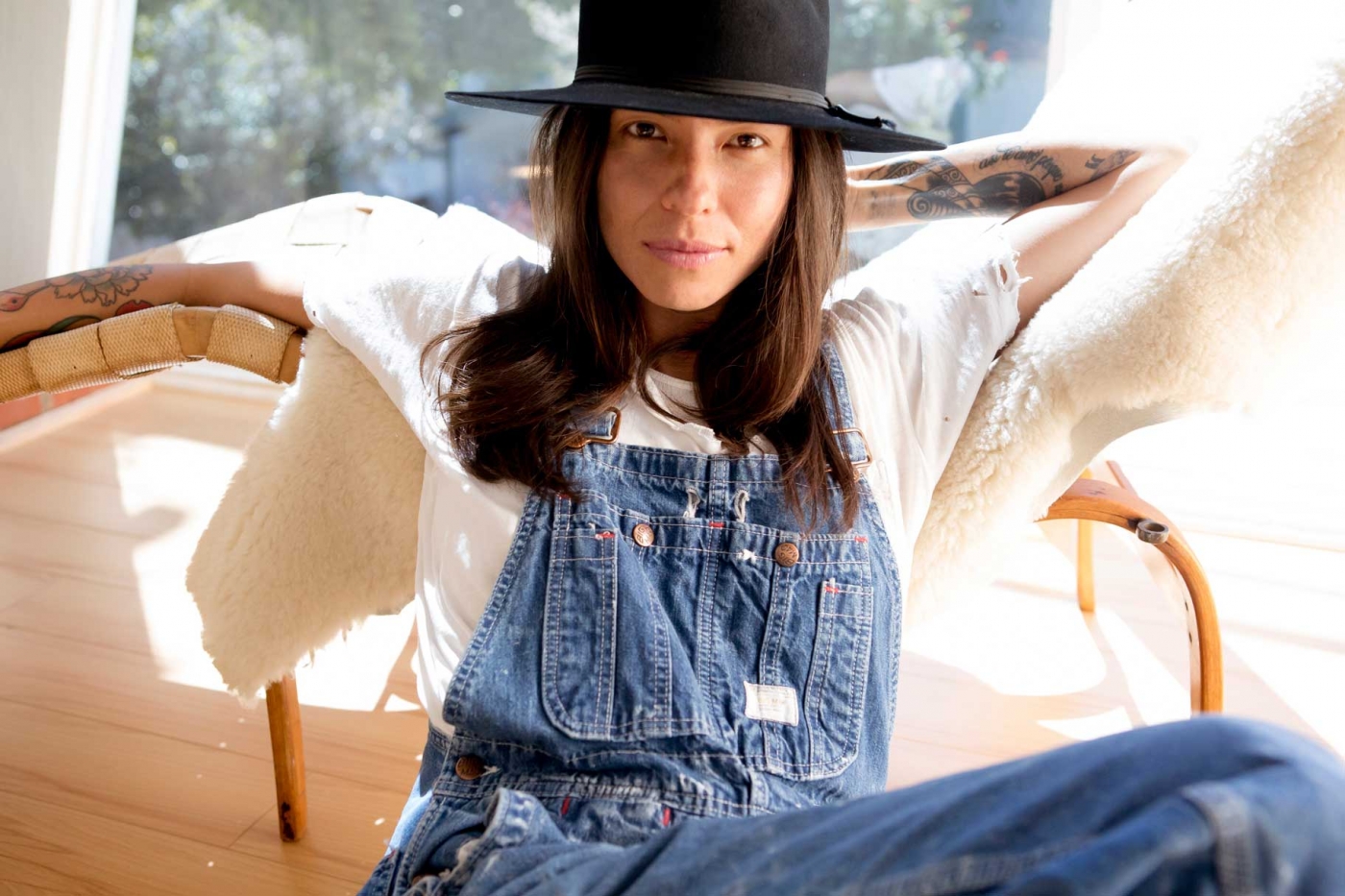 If you could go anywhere in the world in your overalls tomorrow, where would you go?

To the bottom of the ocean. In the middle of nowhere.

What’s the best possible ending you could imagine for them?

That they would disintegrate back in to the earth creating a hole in the ground where rain would fill it up and make a body of water for people to then swim in.

What’s the best possible thing you could be doing in them right now? 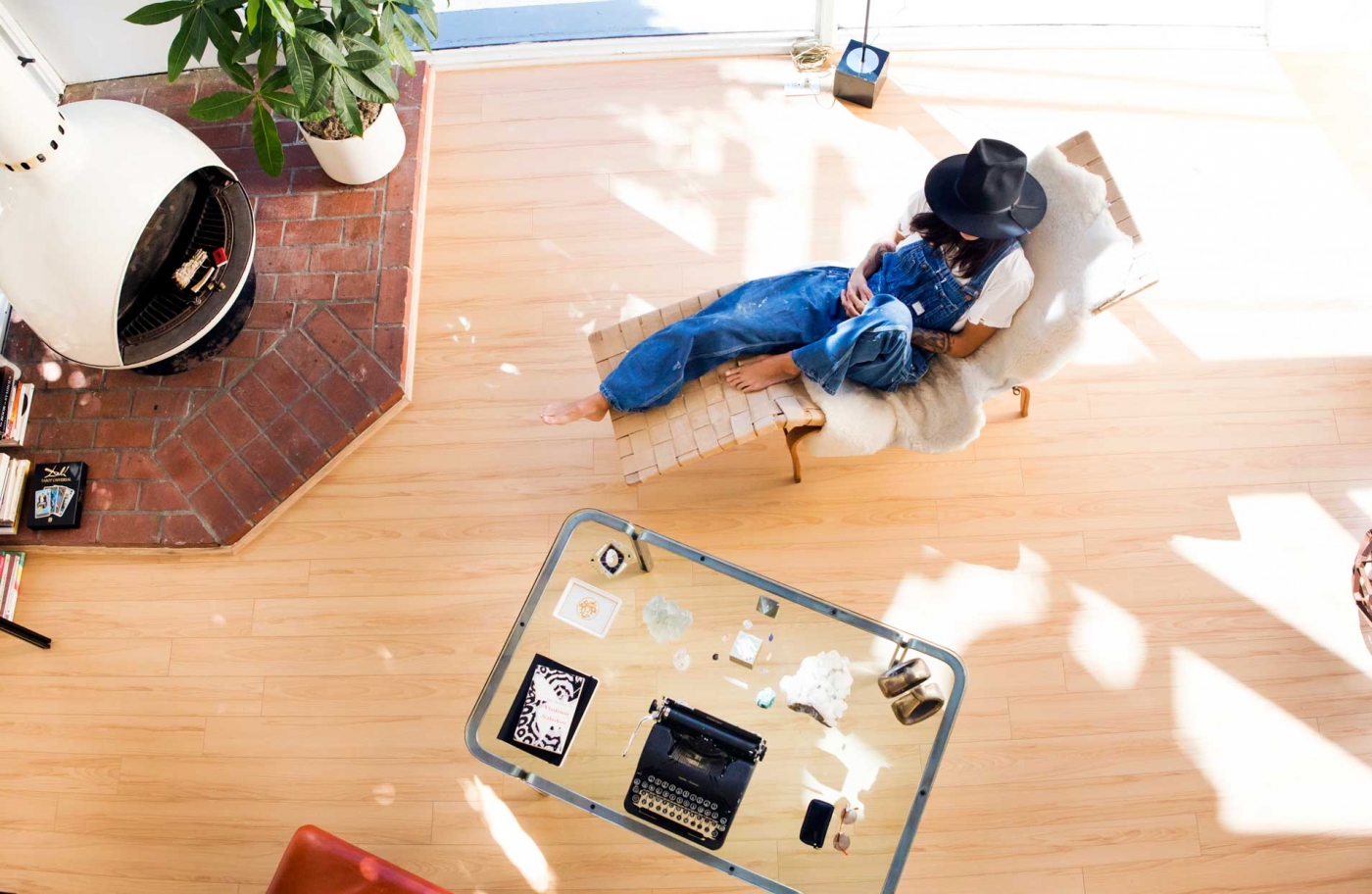 Tell me about some of the work you’ve made wearing your overalls.

I think clothing holds a lot of energy within its fibers. I’ve created so much art in these overalls in the last 13 years that they are actually a piece of art of themselves.

Tell me more about that work and what it means to you.

I try to create work that speaks volumes and evokes some sort of dialogue within. That holds a narrative within each image or each painting/drawing so that it may bring you to another plane of existence. I’m trying to uncover a combination of mediums that really convey what it is inside of me. It’s always a work in progress.

What do your overalls and your work have in common?

They both hold on to memory and are able to lose themselves in a dream quite easily.

What do your overalls and you have in common?

We create the same shadow. 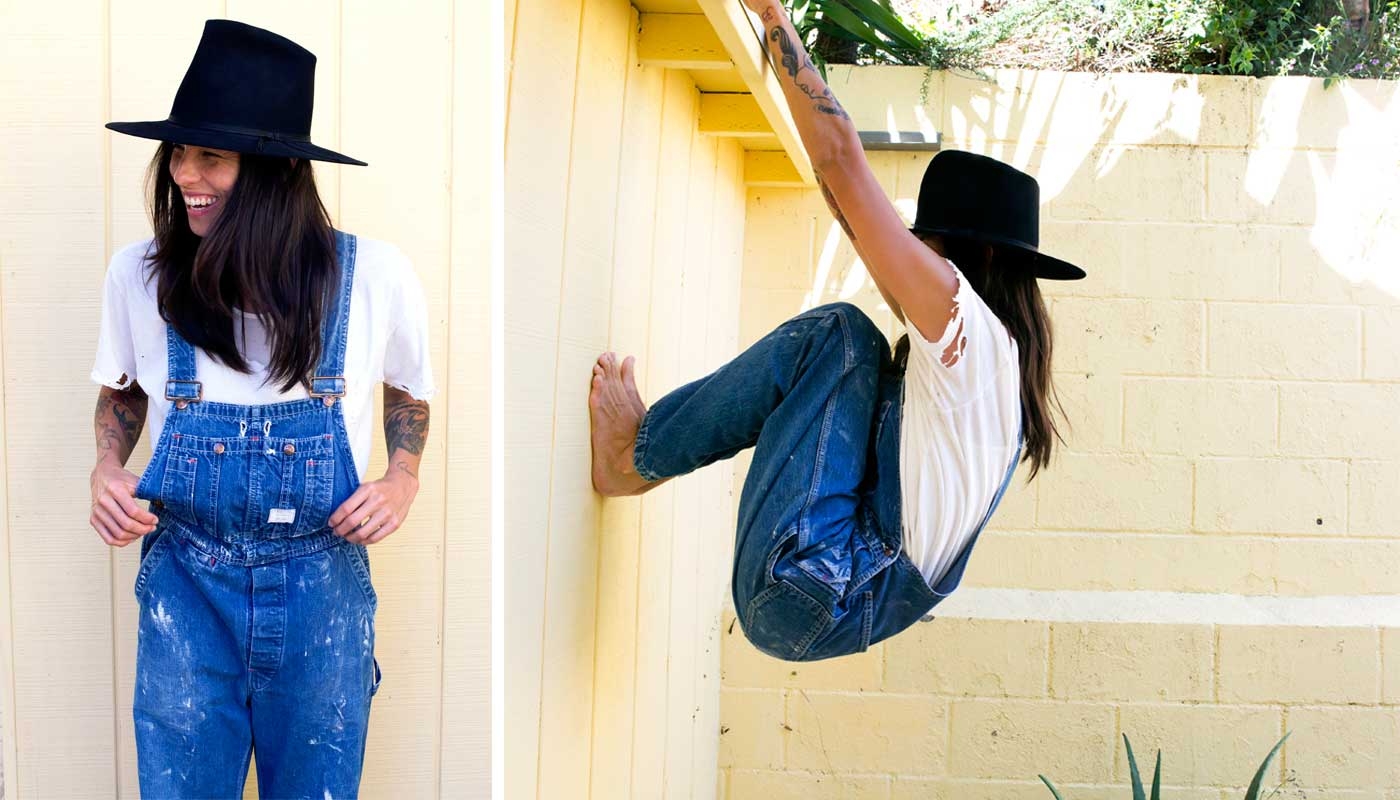 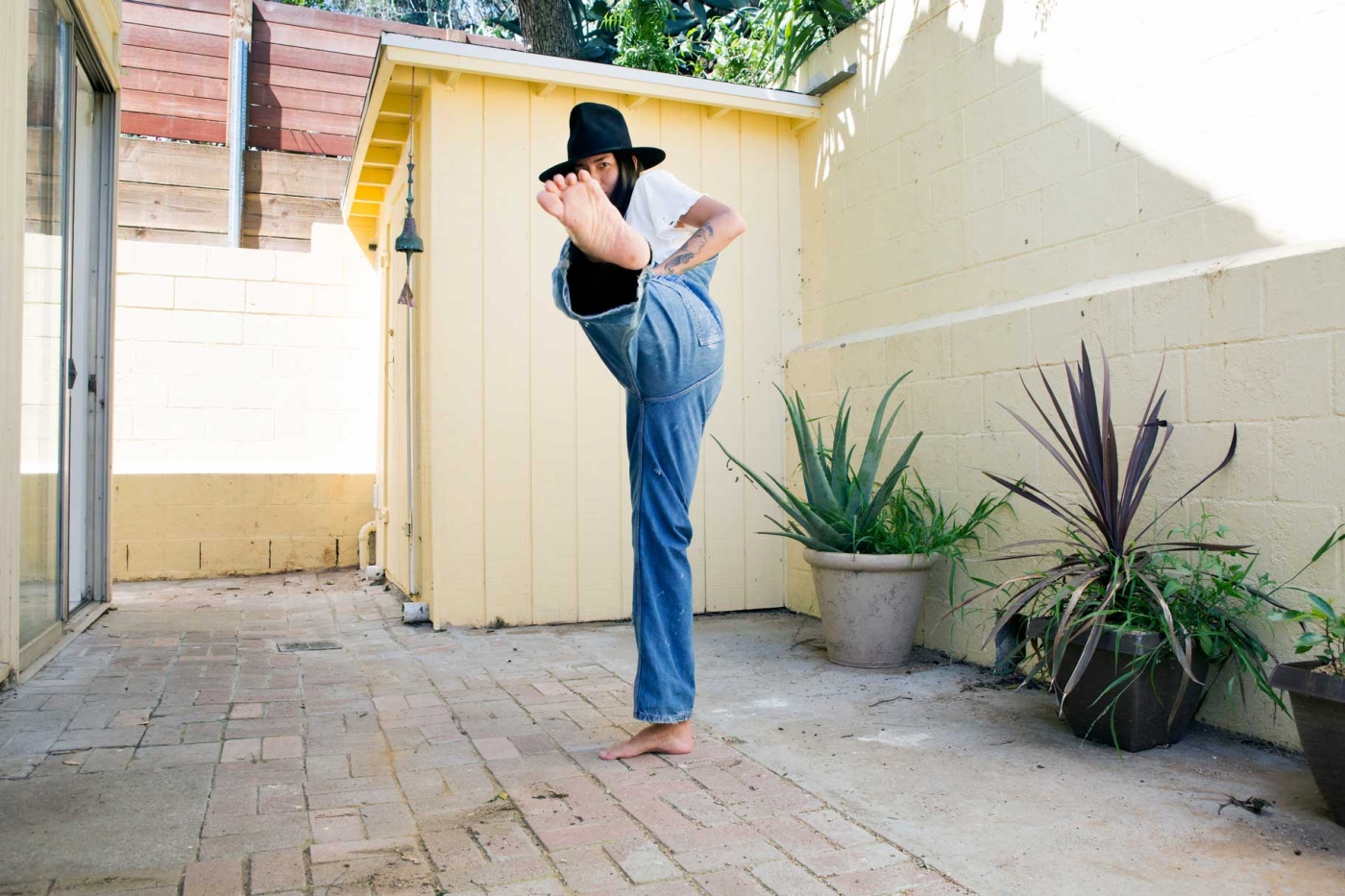 KICK A** In her overalls, she can do anything, see? Get your own below…

If you had to give them away, who would you give them to? Why?

A Sherpa. I want them to have a nomadic existence next.

If you had to wear them forever, could you?

Absolutely. There’s something very poetic about them. I need poetry in my life. 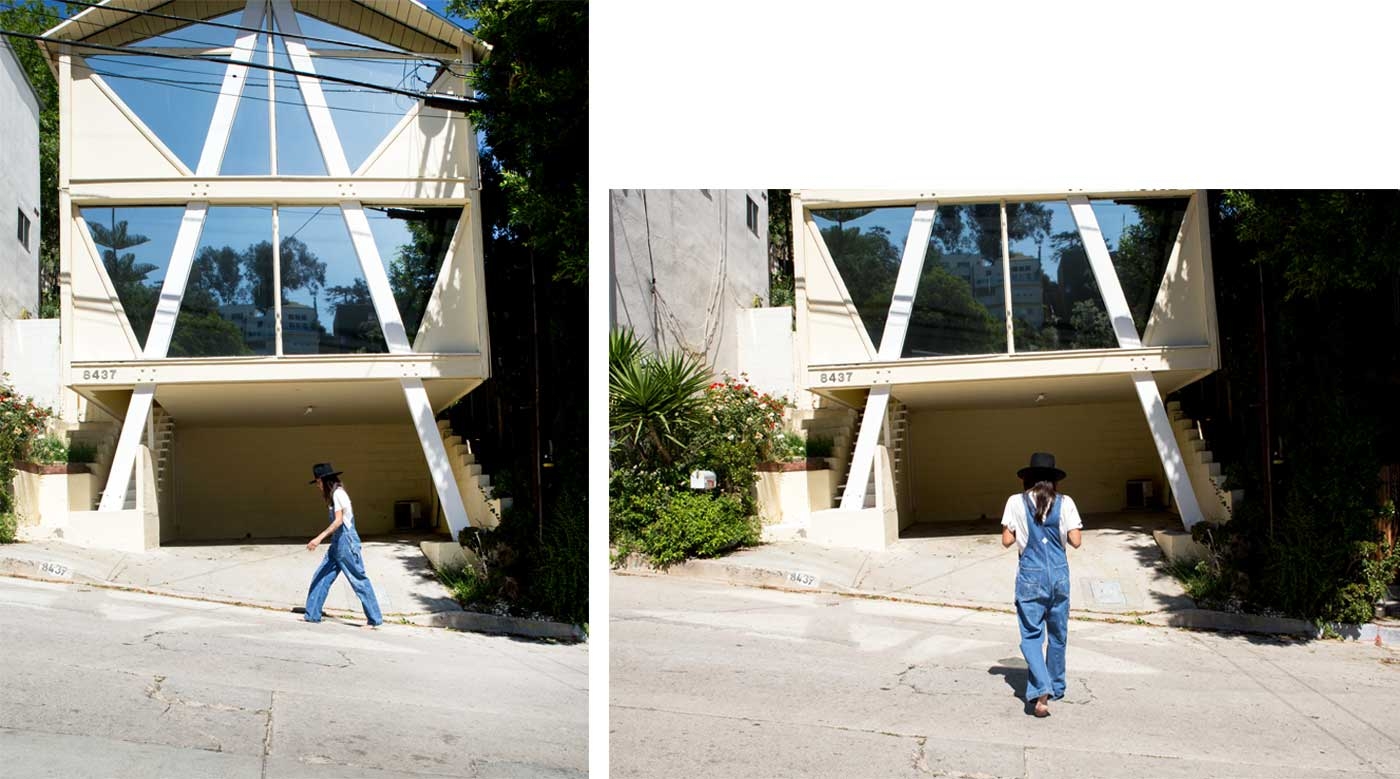