Donwan Harrell, the designer behind the cult men’s line Prps, has the coolest office I’ve ever seen in New York City. It’s packed with vintage collectibles – jeans, of course, but also worn-in military jackets, race car memorabilia, and nostalgic, antique toys, still in their boxes. It explains a lot about Prps, which stands for “purpose” and is considered by many to be one of the purest, most detail-oriented, most artful denim collections around – its designer is a connoisseur, a collector. Donwan knows his stuff.

Which is why I asked him to give us a little lesson in denim and the indigo dye that makes it so special. Donwan, who teaches a course called Jeaneology (like archaeology, for jeans instead of ancient ruins) at the Virginia Commonwealth University, is a bit of a nerd when it comes to our favorite subject. (The only thing that might excite him more is the helmet belonging to the legendary 70s Los Angeles street car racer “Big Willie” Robinson, which came with the car he drove, that Donwan now owns.) “I have to have the dirty stuff that’s just been ripped out of the mine,” he said of the vintage he collects and uses to instruct the, pardon me, but, totally f*ucked up-amazing bespoke washes you’ll find in Prps Noir, which is the most exclusive of Donwan’s collections, all made in Japan (in addition to the Prps main line, there’s Noir and an apparel line, Prps Goods & Co.). Here, he gives us the 101 on some of denim’s – and indigo’s! – little-known facts and legends.

Not So True Blue

“From 1873 – 1905, all ‘waistalls’ – as jeans were called back then – were dyed with natural indigo (also known as indigofera or Woad). A German chemist named Johann Friedrich Wilhelm Adolf Van Baeyer, who won the Nobel Prize for Chemistry in 1905, invented synthetic indigo. His commercial blue coloring made it to U.S. shores and was introduced to the U.S. textile trade soon after. Today, 95% of our jeans are dyed using synthetic indigo.”

“The bond between synthetic and natural indigo dyes and the cotton yarns of jeans is weak and impermanent. This is why your jean fade to white after extended periods of wear and tear; the blue dye rubs off the yarns.”

Indigo is in Art

“In a lot of Renaissance Christian art, St. Mary the Virgin is draped in a natural, indigo-dyed cloak. See Madonna Del Granduca (Raphael, 1505), The Madonna of the Book (Sandro Botticelli,1480), Madonna in the Rose Garden (Stefan Lochner, 1448), and The Rest on the Flight in Egypt (Gerard David 1510) as examples.” 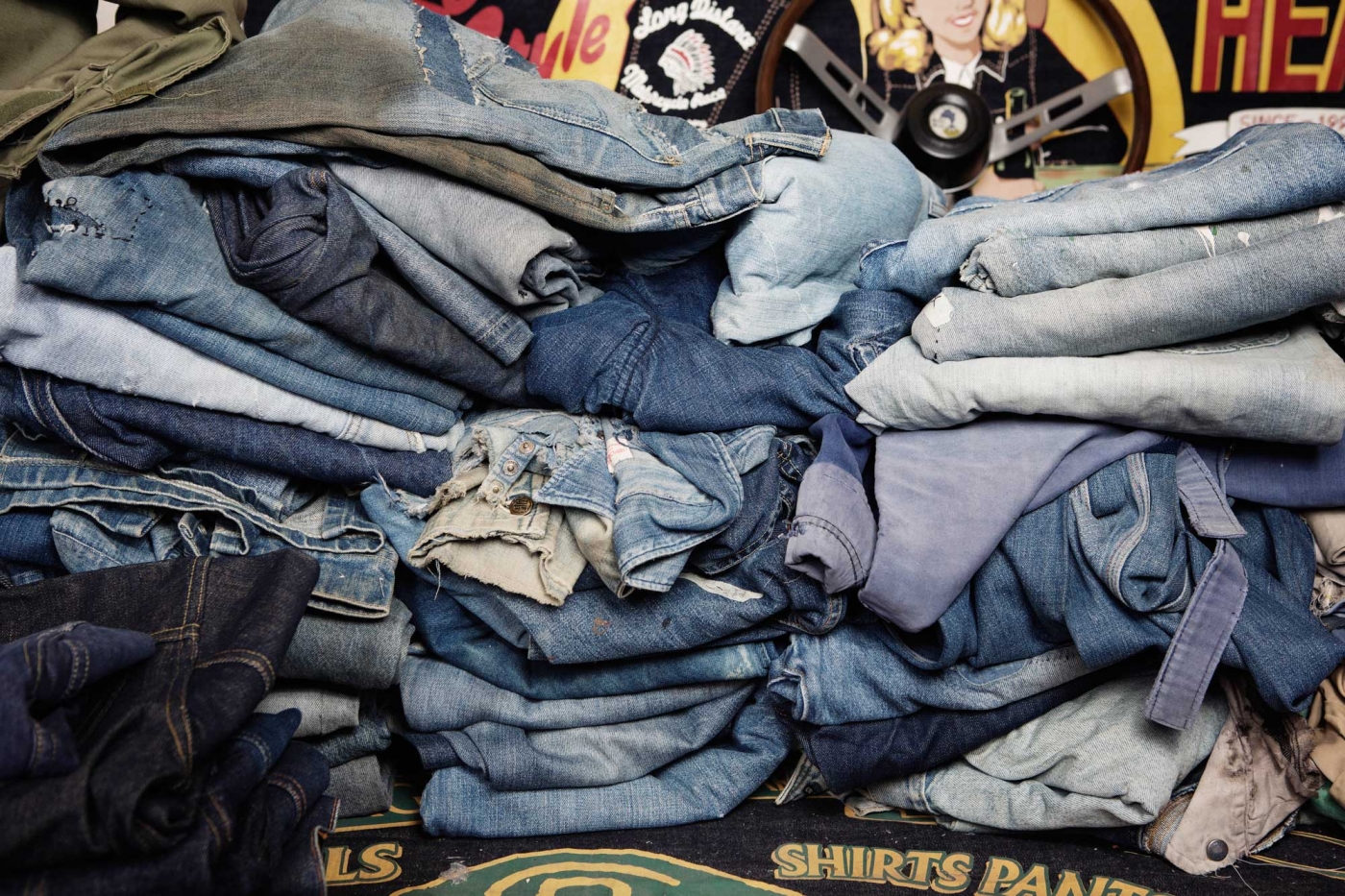 FINDERS KEEPERS Donwan Harrell’s collection of vintage denim is full of one-of-a-kind pieces, some of which have been painstakingly mended and repaired by their original owner (above).

Indigo Fought For our Independence

“Before the early 1970s, all denim jeans purchased throughout the world were manufactured in the U.S.”

The Rivet Was Once a Revolutionary Idea

“Levi Strauss and his partner Jacob Davis were denied a patent on their use of rivets to on jeans twice, because the rivets they used were too similar to the ones used on the boots worn by soldiers in the Civil War. To get the patent, Jacob modified the Levi’s rivet by backing it with a thin piece of leather. If you look at early denim from the late 1870’s, you can sometimes see the dried hard leather bit behind the metal rivet…if it hasn’t already disintegrated. This feature has since been done away with, making Levi’s with leather-backed rivets some of the hardest to find today.

“The American designer called it: ‘The best single item of apparel ever designed.'” 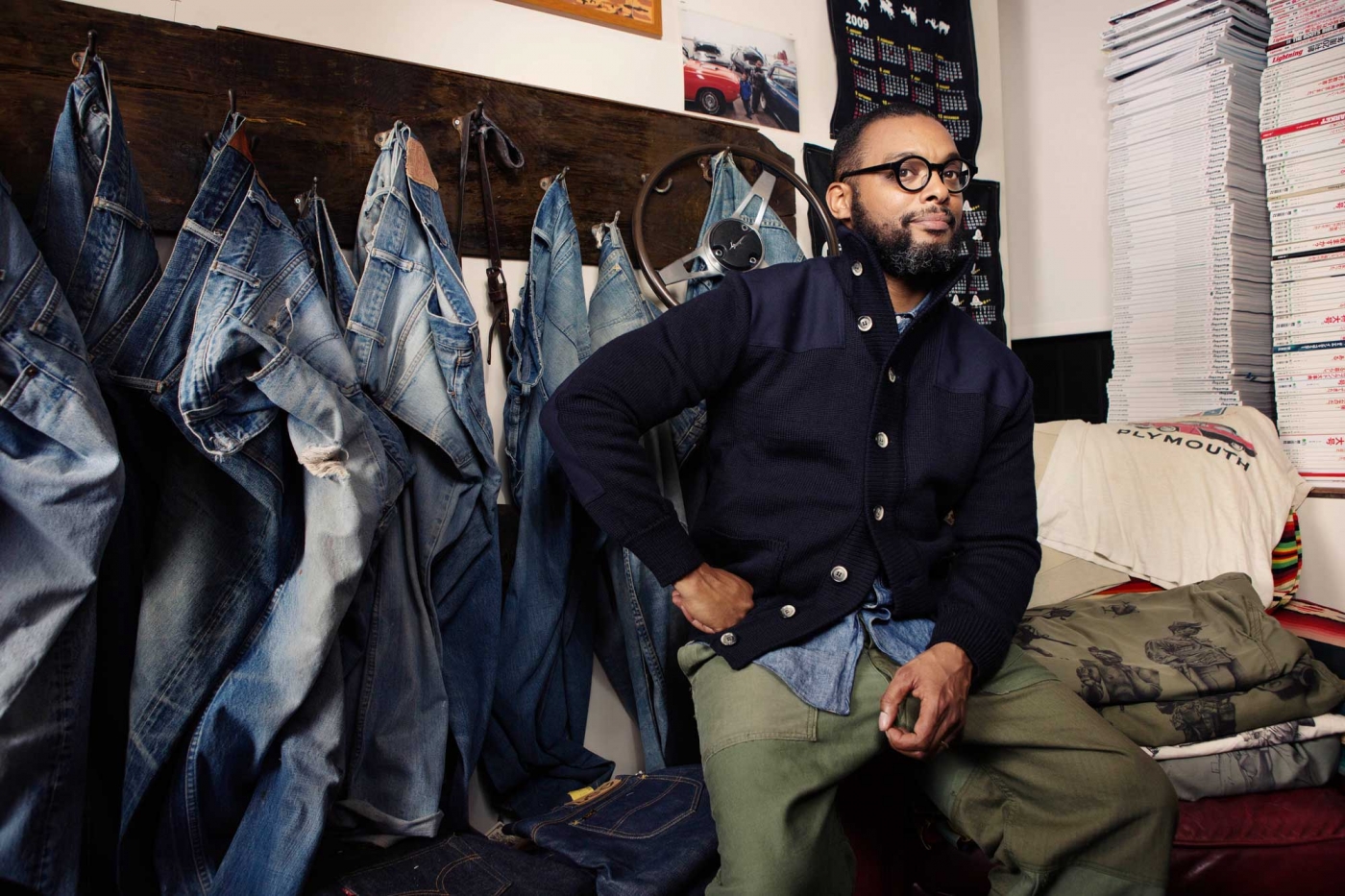 The Back Pocket from Back in the Day

“The arc stitching on the back pocket of Levi’s jeans is one of the oldest trademarks in the United States – about as old as the Campbell’s Soup and Quaker Oats logos.”

How to Care For Your Favorite Pair

“If you’re a denim purist and you refuse to wash your jeans in order to maintain their inimitable honeycomb whiskered patterns, try Fabreze to freshen them up. It’s mild and deodorized so it eliminates smell without harming any of your hard-earned indigo patterns.”

The Skinny on Skinnies

“The slim-fit denim style for men was originally developed and designed in 1935 for cowboys by an exotic dancer named Sally Rand. Sally was a “friend” of H.D. Lee, who invented Lee jeans, and felt that the skinny jeans not only had more sex appeal, but were more functional, too. She single handedly took apart a pair of Lee’s jeans and repined them directly on his body to display the skinny fit she desired.”