It was via Instagram that I discovered designer Aurora James, who not only has the most covetable denim sandals and slides in her shoe line, Brother Vellies, but also loves indigo so much she had her couch custom upholstered in a patchwork of traditional African indigo textiles. Entering the Brooklyn apartment-slash-studio she shares with her photographer boyfriend Jason Hardwick recently, I knew all about the Vellies – from following @brothervellies, mostly – but the latter (that couch!) was a total surprise. As were the chic Frame overalls that Aurora wore for our shoot with a fuzzy pink sweater by Ryan Roche and a pair of her own denim babouches (Moroccan slippers)…as was the giant wall stocked with really cool footwear in back, too (see below). I didn’t just swoon, I started shopping.

A finalist in the recent CFDA/Lexus Eco-Fashion Challenge, Aurora has built Brother Vellies in workshops in South Africa, Kenya, and Namibia while encouraging the empowerment and self-reliance of their employees, and using mainly sustainable materials – the furs salvaged from animals like the Springbok and Kudu that are killed for food or due to overpopulation, for example – and other utilitarian textiles (like denim). What her Frame overalls know that no one else does, is that she is often up long before dawn corresponding with her collaborators in Africa. “I’m really trying to scale back on my travel there,” she told me. “If I go less, it signals success because it means the workshops are getting better at doing things on their own.”

Here, Aurora talks about the ease of wearing overalls, the things her grandmother taught her about jeans, and the reason it makes such good sense to wear denim on our feet.

Tell us about your Frame overalls. When did you get them and what do you love most about them?

I got them about four months ago, and they’re just super comfortable, easy to throw on. I’m an overall, onesie kind of person – I like pants and tops that are one thing.

Do you have many pairs of overalls?

Yeah, but not all denim.

What about denim helps you do your job?

Probably the same thing that made me want to use it to make Vellies – the idea that it’s for work. Denim is going to last, and it’s also going to have a fingerprint in the sense that it will grow and evolve with you and show your habits and become something unique to you. It’s not something that you have to fuss over, either. I feel like it makes things easier for me because I can put it on and know that it’s going to be comfortable. And reliable.

Tell us about your earliest denim memory.

Well, my grandmother was born in 1916, and she never wore jeans because people who did that did hard, manual labor. But, she would also tell me these really romantic stories of her father’s jeans. Whenever she talked about jeans, she had a really endearing way of speaking about them. That, and the idea of hard work, is what sticks with me. Jeans are worn and worked in. It seems to me like a material that contributes as much to what being done as the person doing it. Does that make sense?

So to use it to make shoes seems really natural.

How did you get into making shoes?

I’ve always been really into shoes. I traveled a lot with my mom when I was younger and she had an amazing collection of ethnic shoes – like clogs, mukluks…the ones that geishas wear that are elevated and wooden [called geta]. I would wear them a lot. I always thought they were so interesting.

When I was seven, we moved to Jamaica. All of the Rastafarians there wore desert boots, specifically Clarks, which they’d talk about in this very passionate, almost religious way. Their desert boots were a thing. Really personal. I was young, and so I didn’t know why, or for what reason, but I continued thinking about it as I got older. Like, “Why were they so into Clarks?”

Did you ever find out?

Well, through working in fashion, I learned that Vellies are a traditional South African and Namibian shoe style. And they look just like Clarks. And I learned that Clarks basically based the design of their desert boot off a traditional African shoe. Which would maybe explain why the Rastafarians and so many people feel this intuitive connection to them.

What are traditional Vellies made of?

Kudu leather, which is the most resilient. There’s an overpopulation of Kudu in Namibia, so the government mandates the killing of a certain amount of them. All the leather that we use in our classic Vellies is Kudu. It’s a very basic, functional shape, made of very resilient material.

Yeah, it is. It’s really utilitarian and intuitive like that. People have been making this style of shoe for several centuries in Africa. It’s evolved, but in South Africa they have this saying: If there are two things that can survive the apocalypse, it’s cockroaches and Vellies. They just last forever. 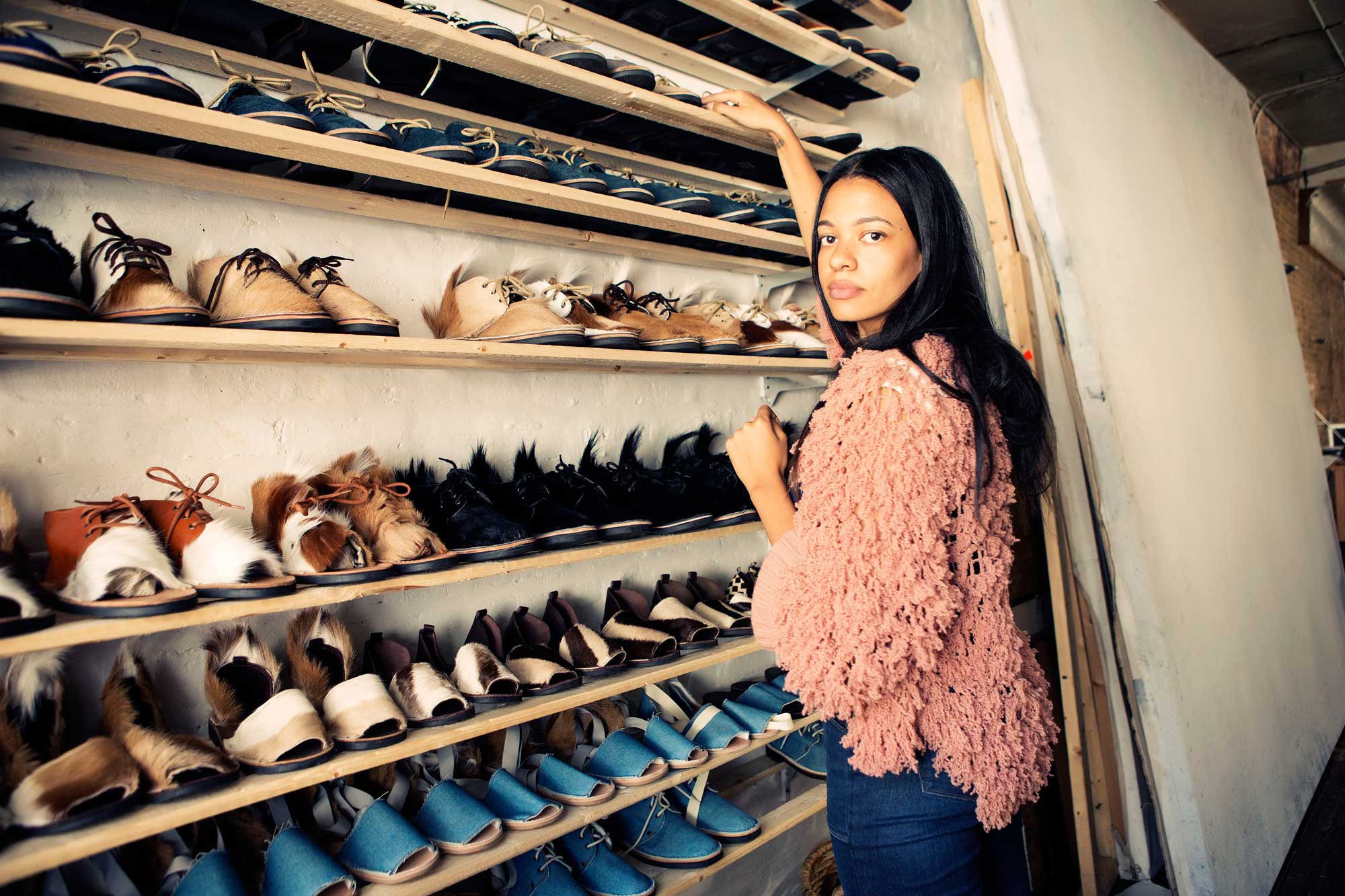 HAPPY FEET Above: Aurora in her studio in Brooklyn, NY. Below, from left: Brother Vellies denim Tyre sandals ($285), Denimbok sandals ($380), and patchwork denim Otavis, ($265); shop below or go to brothervellies.com.

So, why make Brother Vellies in Africa, as you do, if they already make plenty of Vellies there already?

Well, my grandmother, who I mentioned, did this thing when I was growing up, sponsoring children in Africa. Do you remember that? It was huge in the 80s.

Yes, there were commercials…

Right – for less than a cup of coffee a day, you can sponsor a child in Africa. Which is crazy. But I grew up with that. Our fridge was a collage of all of these letters from these children in Africa. I’d be pen pals with them. It got me into writing letters and postcards, something I do religiously now, actually, even to this day. I’m a big postcard person. [True, Aurora sent me a postcard the last time she went to Africa.]

When my grandmother passed away, I wanted to find a way to honor her. I thought about sponsoring a child. I was 20 and at the time. I think I had about $5, and I was not in a position to make a lifelong commitment to a child in Africa. Plus, I kept thinking: How many people are there in Africa v. in America? Everyone’s going to have to sponsor lots of kids…it didn’t quite synch up with me. And so in my mind, I decided it needed to be about trade, as opposed to aid. I think the best possible way to help people is to give them an education, and empower them to be able to support themselves. Horrible things happen in many parts of the continent – a lot of things can be taken away – but an education can never be taken away. It was important to me that I support the people there in a way that would allow them to be free of needing donations. That would let them excel on their own.

So you teach them to make shoes…

Right. The people in the workshops that I partner with know how to make something from beginning to end. It’s not an assembly line, where one person only knows how to lace or punch eyelets. Granted, some people are better at certain tasks than others, but everyone knows how to make a shoe from start to finish. 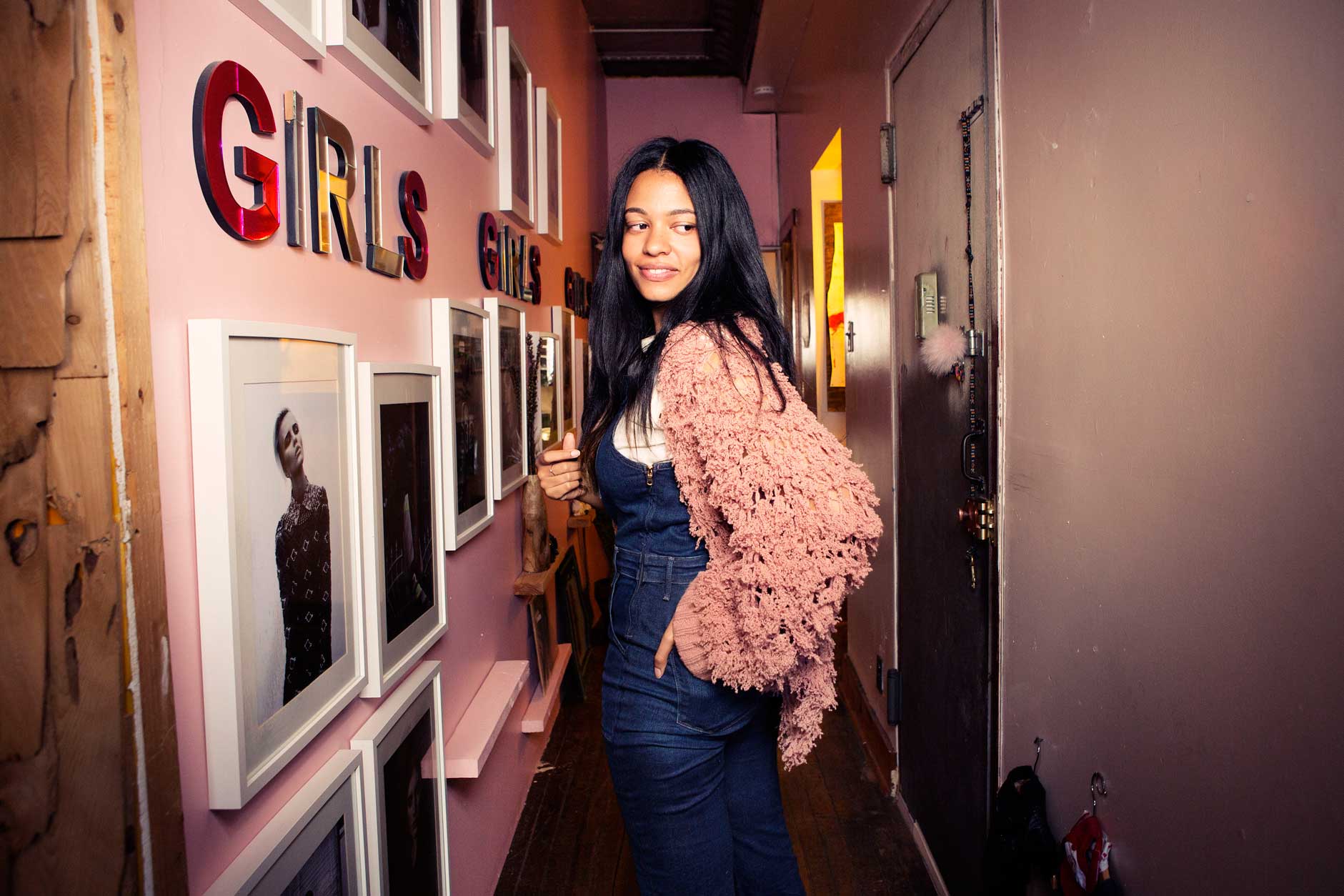 PICTURE PERFECT Aurora in the gallery of her home in Brooklyn, where fashion photographs taken by her boyfriend Jason are displayed.

OK, I want to talk a bit more about your overalls. First, how would you describe them in one word?

Whoa, I mean, the first word that came to mind was ‘comfortable.’

If you were to take them anywhere in the world tomorrow, where would you go?

What do your overalls know about you that no one else knows?

Sometimes. I have to get up early because of the time difference in Africa.

If they were to have a theme song, what would it be?

Can you sing it for me?

It’s the one that’s like, “Tally me banana, daylight come, I wanna go home.”

Yeah! I guess, yeah. [She has her assistant look it up online.] Harry Belafonte, “Banana Boat Song.” That’s what it’s called.

Not wearing anything right now. 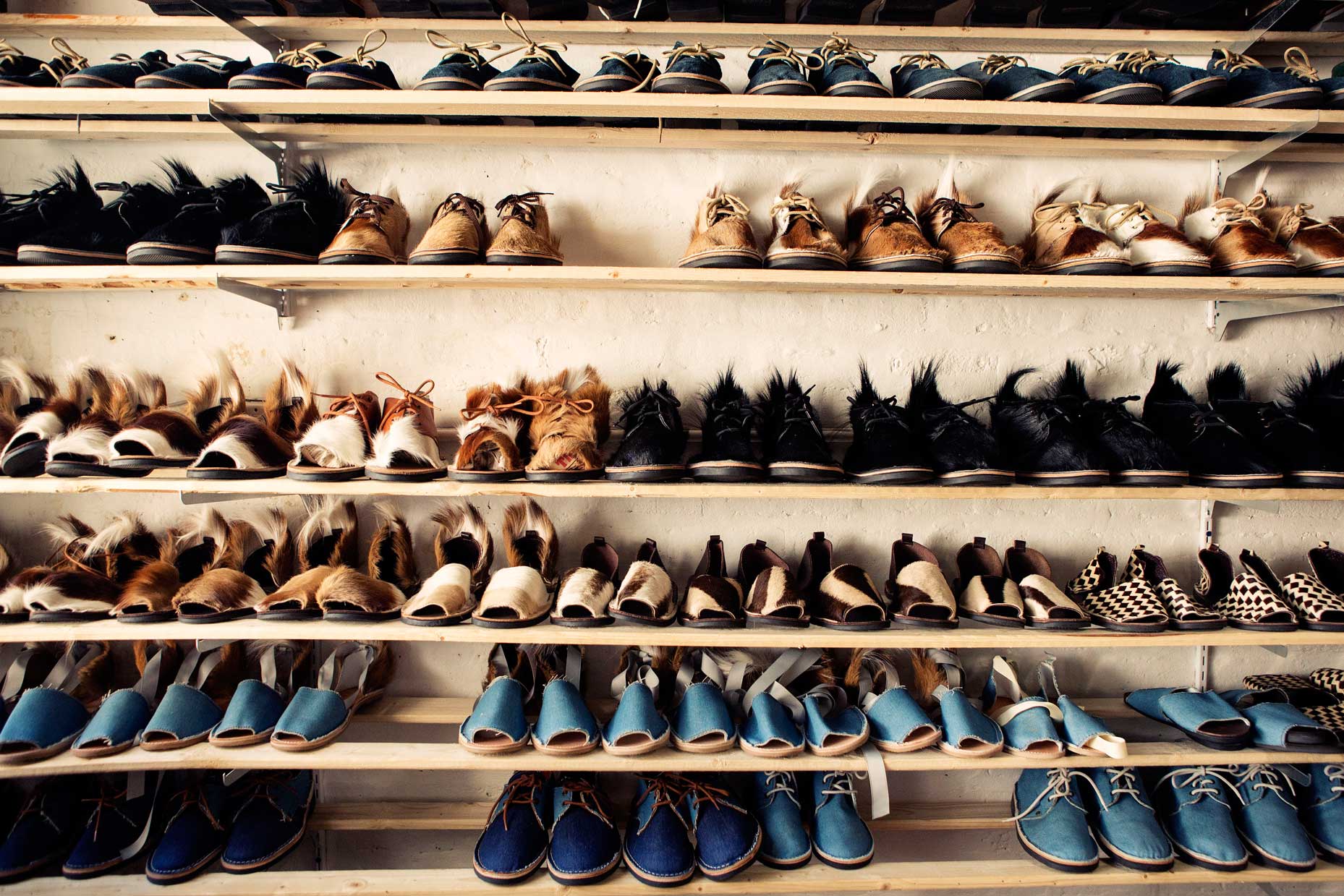 Shop the look below, and go to brothervellies.com for more.